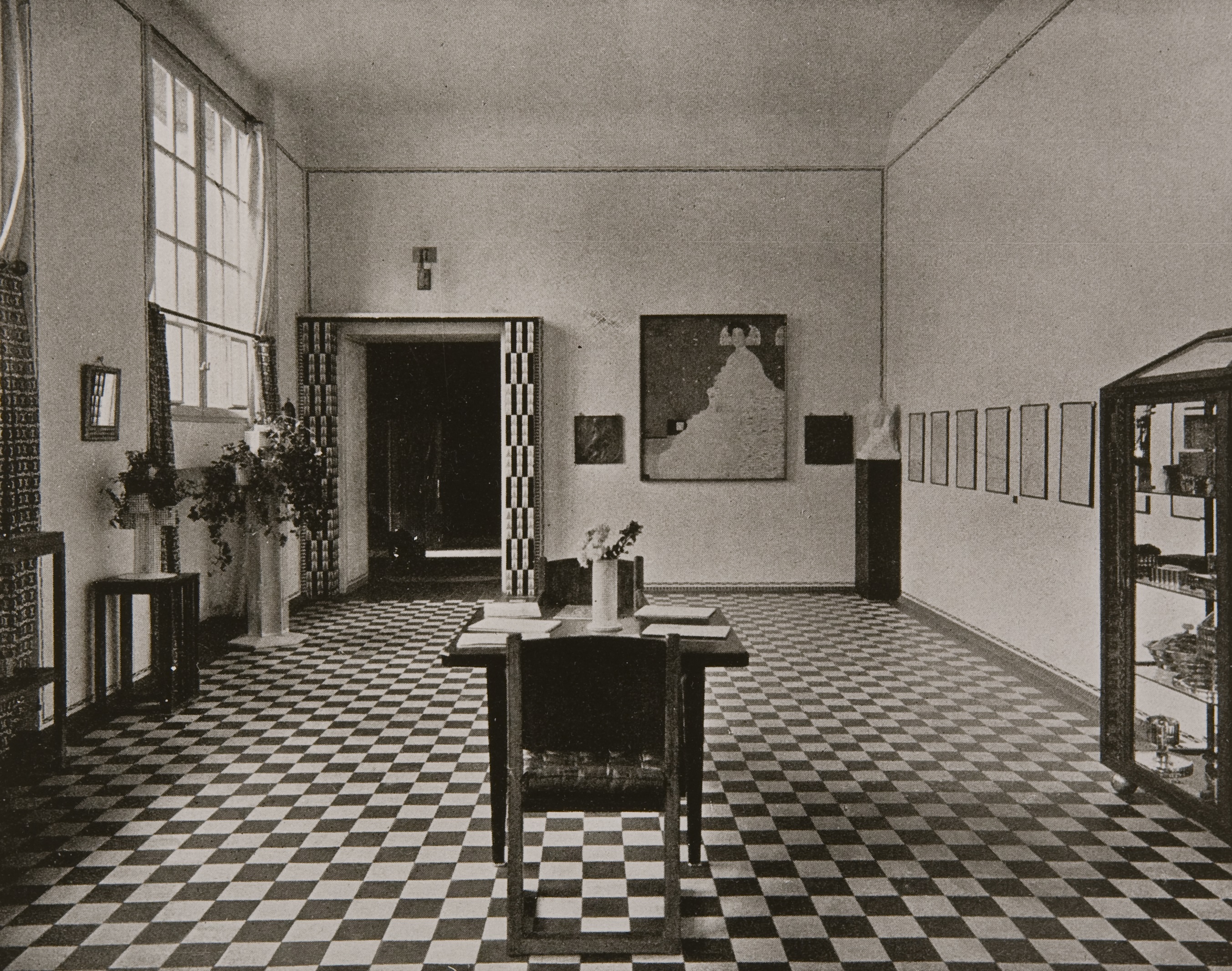 The Kunsthalle opened its doors in 1909 as Mannheim’s first museum, with a “master exhibition” featuring the most important French and German artists of the nineteenth century. The event took place in the art nouveau building, erected to celebrate 300 years of prosperity in the industrial city. The 31-year-old founding director won Mannheim’s citizens over with a visionary concept: With the help of private donations, he created one of the world’s first public collections of modern art. By February 1910, Wichert had succeeded in acquiring the monumental work the Execution of Emperor Maximilian by Edouard Manet for 90,000 gold marks. He went on to acquire masterpieces by Monet, van Gogh, and Cézanne. Although decried in conservative circles, Kunsthalle Mannheim gained an international reputation when it came to modern art. In 1911, Wichert founded an independent association to establish the visual arts in Mannheim. Its motto was “art for all” and it had 7,000 members in 1914. Its forward-looking pedagogical concept aimed primarily to serve members of the working class who were eager to educate themselves. The “Academy for Everyone” organized weekly illustrated lectures, tours of the collection, and educational exhibitions. Wichert’s movement in Mannheim saw success across Germany. It aimed to both reform the museum as an institution and to change society for the better following the maxim “filling cities and life with art.”

The second director succeeded in welcoming a cultural golden age to Mannheim by implementing art-historical classification systems and innovative exhibition concepts. With the exhibition New Objectivity: German Painting After Expressionism, he identified a turning point in contemporary art. New Objectivity emerged as an art-historical term for a multifaceted spectrum of verisimilitude in the art, photography, and lifestyles of the Weimar Republic. Two years later, Hartlaub brought abstract works from around the world to center stage in the survey show Paths and Directions of Abstract Painting in Europe, the first exhibition of its kind to take place in a museum, providing comprehensive debuts to such luminaries of contemporary art as Edvard Munch, James Ensor, and Max Beckmann. Over the course of his exhibition programming, he extended the Mannheim collection’s influence in Expressionism, New Objectivity, and international developments within the art world. Hartlaub was immediately removed from his position as director once the National Socialists ascended to power. In April 1933, the first degenerate art exhibition to take place in Germany was held at the Kunsthalle Mannheim under the title “Pictures of Cultural Bolshevism.” Four years later, 91 paintings, 8 sculptures, and 466 works on paper were expunged from the city’s ownership due to their “degenerate” qualities – one of the largest losses in the museum world, the effects of which continue to shape Mannheim’s modern collection today.

With his exacting standards of quality, the fourth director was to become the institution’s spiritual compass throughout the second half of the twentieth century. In 1957–58, he organized the first survey exhibition of German and French Informel. More premieres followed: Marc Tobey (1960), Francis Bacon’s first continental show (1962), retrospectives of Hans Arp (1960) and Naum Gabo (1965). The Mannheim-born, Paris-based art dealer Daniel-Henry Kahnweiler sent the museum twenty works on paper by Picasso in 1970. In 1977, the Friends of the Kunsthalle Mannheim association was established. European sculpture lay at the center of Fuchs’s collection policy: Existential and abstract post-war developments were particularly interesting to him. The spectrum of his acquisitions encompassed works by Alberto Giacometti and Max Ernst as well as Germaine Richier and Barbara Hepworth. He transformed the Kunsthalle Mannheim into one of Germany’s foremost museums for sculptural art. His reference work, entitled Contemporary Sculpture, was published in 1970 and was illustrated with images of key pieces from the Mannheim Collection. He collected Constantin Brancusi’s Fish in person from a Parisian studio – allegedly dressed in a white deliveryman’s smock – and conveyed it back to Mannheim where he made it the centerpiece of the art nouveau building’s domed hall. For Fuchs, the human figure remained the integral impulse behind sculpture – even in its absence. His most daring exhibition, The Excluded Human, took place in 1975.

1909   Mannheim’s Museum
In December 1909, the city’s Kunsthalle opens its doors as the first museum in Mannheim. Founding director Fritz Wichert lays the foundation for an exemplary collection of modern art with his bold acquisitions of pieces from the French and German avant-garde.

1911   Kunsthalle for All
The Academy for Everyone offers a popular educational program to the working people of Mannheim. By means of educational exhibitions, the Art Historical Institute located in the Old Library, and weekly lectures held in the rose garden, the Kunsthalle reaches nearly 120,000 people in 1913.

1921  Special: Sculpture
The Jewish patron Sally Falk makes one of the first contributions to the sculptural collection of the Kunsthalle for which it will become well-known throughout Germany by donating her collection of works by sculptor Wilhelm Lehmbruck.

1925   New Objectivity
Gustav Friedrich Hartlaub coins an art-historical term for a whole period with the exhibition entitled New Objectivity: German Painting After Expressionism. He dedicates his first exhibition at the museum to international abstract art and Max Beckmann.

1945   Rehabilitating the Modern Collection
After World War II, Passarge tries to fill the holes in the collection by buying pieces back and making new acquisitions, and developing its profile with regard to abstract painting.

1962   Francis Bacon Premiere
Under the direction of Heinz Fuchs, the Kunsthalle gains renown throughout Germany with spectacular exhibition premieres and the creation of an international collection of sculptures.

1969   A Fish for Mannheim
The Kunsthalle is given a symbol thanks to the installation of Constantin Brancusi’s Fish in the domed hall of the art nouveau building.

1977   Friends of Art
The Friends of the Kunsthalle association grows to approximately 2,000 members over the next decade and contributes (mainly contemporary) art to the collection.

1983   Functional Architecture
The extension, designed by Mannheim architectural firm Lange Mitzlaff Böhm Müller, is opened on Friedrichsplatz. 25 years later, it can no longer meet the standards of an international museum.

1990   Pioneering Museum Shop
Manfred Fath establishes one of the first volunteer-run museum shops and the Exhibitions gGmbH company. In this way, he finances compelling exhibitions and acquisitions for the museum collection.

2010   Beacon of Energy Efficiency
The listed art nouveau building is completely renovated and equipped with the most up-to-date museum technology at a cost of 22 million euros, provided by the state and the government. The company bogner cc. Wien develops a museological utilization concept for the Kunsthalle.

2012   Millions Donated
Patron Dr. h.c. Hans-Werner Hector, co-founder of SAP, donates 50 million euros for a new building on Friedrichsplatz. In an anonymous competition between twenty-nine international firms, the Hamburg-based architectural company von Gerkan, Marg and Partners wins out over Volker Staab to be awarded first prize. The private Kunsthalle Mannheim Foundation takes on the role of contractor for the project, overseeing construction and budgeting.

2013   Illuminated Art Nouveau
In October 2013, the reconstructed atria are reopened with the exhibition Dix/Beckmann: The World As Myth. The final exhibition to take place at the Mitzlaff Building is Only Sculpture! which brings the 400 works of the collection together in one artistic installation.

2017   New Building Hand-Over
On December 18, the Kunsthalle Mannheim Foundation hands the new building, completed in just under three years and within budget, over to the city. Federal President Frank-Walter Steinmeier and Minister President of Baden-Württemberg Winfried Kretschmann attend the celebrations.

2018   Grand Opening
On June 1, the new Kunsthalle is opened with a new and unconventional display of its collection, newly acquired site-specific works of art by contemporary artists, and the first major temporary exhibition of the works of pioneering Canadian photographic artist Jeff Wall.

Tracing the Past History of Our Works

Since 2011, the Kunsthalle Mannheim has systematically researched the provenance of all our paintings, sculptures, and graphic works.

PROVENANCE RESEARCH
The Collection and Its History

Learn more about our collection and how it came into being.

COLLECTION
Come in and find out: